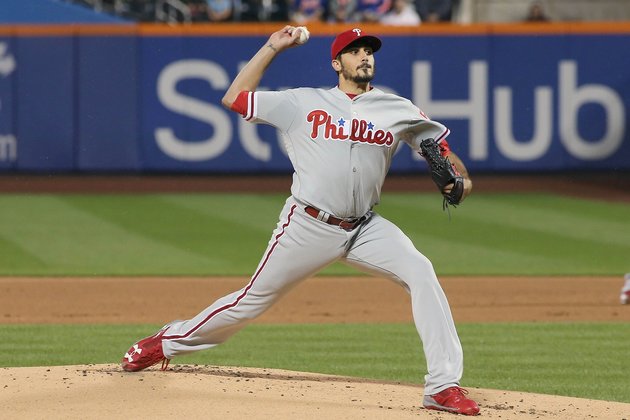 The last time the Philadelphia Phillies hosted the Miami Marlins at Citizens Bank Park, they swept their divisional opponent, held the lead in the National League East and were 15 games over .500.

What a difference six weeks can make.

The Phillies have not won a series since that four-game sweep of Miami, and have plummeted out of the playoff race with 23 losses in their last 34 games.

The Phillies have been on a slide for more than a month, but the last two weeks have been especially bad. The team enters Friday's game on a five-game losing streak and is 2-9 in September.

Philadelphia (74-71), with 17 games to play, has fallen 7 1/2 games behind the Atlanta Braves in its division and 6 1/2 back in the race for the second NL wild card spot. The only silver lining right now for the Phillies is that they have seven games remaining against the Braves.

"As long as we are still in the race, as long as we still have games left with Atlanta, and as long as we can mathematically catch them, I will believe in this club," first-year Phillies manager Gabe Kapler told reporters earlier this week. "That will not waver."

After getting swept at home by the Washington Nationals, the Phillies are 28-35 against the rest of the NL East this season. They are, however, 9-7 against the Marlins -- the only team in the division the Phillies have a winning record against.

The last-place Marlins (57-89) enter the series having lost five of their last six games and were swept by the New York Mets in a Thursday doubleheader.

Chen has pitched his best this season over his last six starts. He has a 2.04 ERA and 0.91 WHIP since the beginning of August. Chen picked up his 10th loss of the season in his last game, though. He gave up three runs on five hits and notched six strikeouts in four innings against the Pittsburgh Pirates on Saturday.

Chen is 1-4 with a 3.62 career ERA in seven appearances against the Phillies.

Like the Phillies, Eflin has struggled lately. The right-hander has a 7.72 ERA and opponents are hitting .346 against him with a .971 OPS over his last five starts.

Eflin, 24, was pulled after three innings in his last outing against the New York Mets. He allowed six runs on four hits and three walks Saturday as he picked up his third consecutive loss.

"I haven't been doing a good job of executing my pitches when I need to," Eflin told mlb.com after the outing. "When you don't execute pitches, they put a six-spot in three innings. But I don't think I'm far off."

Eflin has surrendered four runs and seven hits in 14 innings (two starts) against Miami this season. He is 1-1 with a 5.21 ERA in three starts against the Marlins in his three-year career.

JERUSALEM - Israel's defense minister apologized on Sunday for the Israeli police's deadly shooting of an unarmed Palestinian man who ...

DUBAI, UAE - The Dubai government is to relax restrictions on wearing face masks in public.Until Sunday, everyone regardless of ...

Something is Deeply Wrong in the American Psyche

Americans continue to shun use of masks

ALEXANDRIA, VIRGINIA - At a grocery store in Alexandria, Virginia, customer Laura Shafor was dismayed about a couple who weren't ...