Russian president in Riyadh with relations at unprecedented high 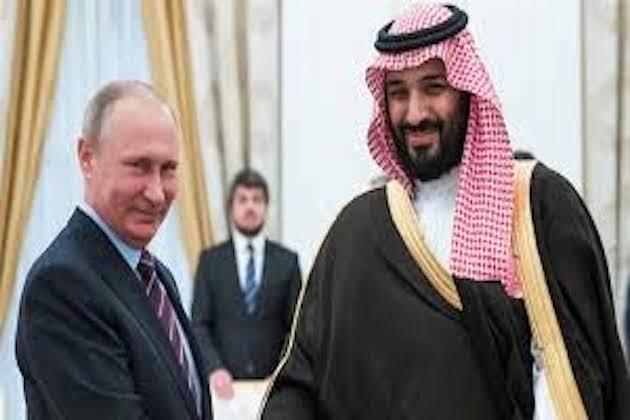 RIYADH, Saudi Arabia - Russian President Vladimir Putin has arrived in Saudi Arabia on his first state visit to the country in twelve years.

It will be a delicate balancing act for the long-time Russian leader who was last in Saudi Arabia in 2007.

While he has warm relations with both Crown Prince Mohammed bin Salman and King Salman, Putin counts Iran, Saudi Arabia's long time enemy, as an ally. He is also close to Syria's Bashar al-Assad. He has been critical too of the Saudi-led coalition offensive in Yemen.

They do however have some things in common. Like Crown Prince Salman, Putin has warm relations with U.S. President Donald Trump.

Putting all the politics aside though, the two countries are solidifying trade ties, and boosting their respective economies in the process. Trade between the two countries grew by 15% last year, and already this year has increased 38%.

"Saudi-Russian relations are stronger today than at any time in the past," Saudi Ambassador to Russia Rayed Krimly told Arab News on Monday.

"The visit by President Putin is very important not only to both Russia and Saudi Arabia, but to the region and the world as a whole. Both countries are members of the G20. In fact, G20 summits were the stage of frequent meetings between the Russian president and Saudi leaders," Krimly added.

Putin has been credited with bringing the two countries closer together over the past decade or so after a long period of indiffernce,

"The Stalin purges inside the Soviet Union included his ambassadors to Saudi Arabia, and relations began a long period of non-existence," Krimly told Arab News.

"The communist ideology of the Soviet Union was incompatible with the Islamic identity of Saudi Arabia. During the Cold War between the two superpowers, Saudi Arabia was strongly allied with the West. We were suspicious of Soviet expansionism, of Soviet support to radical regimes and revolutionary upheavals, and of the Soviet invasion of Afghanistan."

"The second stage saw a resumption of diplomatic relations in 1991. The Soviet Union collapsed, and the Russian Federation was established. However, while relations were maintained and developed, they were not very close," the Russian envoy said.

"The third stage began a few years ago and witnessed a qualitative development and strengthening of Saudi-Russian relations," Krimly said. "Bilateral visits increased and began to culminate in meetings at the highest levels."

The relationship culminated in October 2017 when King Salman visit Moscow, the first state visit by a Saudi monarch.

During that visit, the 2 countries signed fourteen agreements and memorandums of cooperation, covering various fields.

"As the Saudi ambassador in Moscow, my workload has significantly increased in the past year, and keeps increasing. The frequency and level of bilateral meetings keep expanding in significant ways," said Krimly.

"When I began my work in Moscow, we would have an average of one bilateral meeting, at the ministerial level, every month. Nowadays, hardly a week passes without such a bilateral meeting taking place."

"As a result, several important agreements between the two countries began to materialize and have been implemented. These include military, economic and cultural fields," he said.

"The level of trust and direct contact between the leaders has become high enough to ensure further and systematic deepening and strengthening of bilateral cooperation in all fields."

"Because of the commitment of the leadership of both countries to strengthen relations, I have not faced serious problems. Saudi leaders, ministers and officials were always supportive and responsive. I also found Russian officials and the Russian people in general, very friendly and cooperative," the Russian ambassador said.

"For the first time, thousands of Saudis visited Russia during the 2018 FIFA World Cup. They were pleasantly surprised by the warmth and kindness of ordinary Russians, and by the highly modern infrastructure of exceptionally clean and safe Russian cities."

"Like all countries, we may have different views or positions in some areas, but we will continue to discuss them frankly and positively. In brief, areas of common interests and cooperation are continuously expanding, while areas of differences are shrinking," Krimly said.

The level of trust and direct contact between the leaders has become high enough to ensure further strengthening of bilateral cooperation in all fields.

SYDNEY, Australia - Stocks in Asia rallied sharply on Monday, as the U.S. dollar crumbled. The big winner on equity ...

JERUSALEM - Israel's defense minister apologized on Sunday for the Israeli police's deadly shooting of an unarmed Palestinian man who ...

DUBAI, UAE - The Dubai government is to relax restrictions on wearing face masks in public.Until Sunday, everyone regardless of ...

Something is Deeply Wrong in the American Psyche

Something is Deeply Wrong in the American Psyche. The Whole Thing about America is Wrong, Completely Wrong! A Sitting President ...

Americans continue to shun use of masks

ALEXANDRIA, VIRGINIA - At a grocery store in Alexandria, Virginia, customer Laura Shafor was dismayed about a couple who weren't ...