Around the AFC North: Browns 2017 First-Round Pick Asks for a Trade 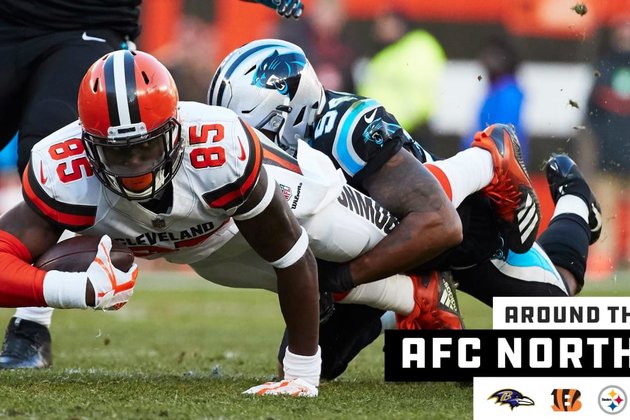 The Browns have their first conundrum under their new leadership as tight end David Njoku has requested to be traded. His agent, Drew Rosenhaus, told ESPN's Adam Schefter on Friday.

Cleveland reportedly wants to keep the 23-year-old tight end, but the 2017 first-round pick is intent on being traded, Rosenhaus told the team.

The Browns signed Pro Bowl tight end Austin Hooper to a four-year, $44 million deal in March, then drafted another tight end in the fourth round.

Njoku suffered a broken wrist that limited him to just four games last season. He was coming off a strong 2018 campaign in which he had 56 receptions for 639 yards and four touchdowns.

The 6-foot-4 former Miami Hurricane is one of the most athletic receiving tight ends in the league but has yet to become a consistent top threat. Sources with other teams told ESPN's Jeremy Fowler that Njoku might be worth a fourth- or fifth-round pick.

The Browns had three first-round picks in the 2017 Draft. They took pass rusher Myles Garrett with the first-overall pick, then safety Jabrill Peppers at No. 25 and Njoku at No. 29.

Garrett is one of the league's top defensive forces but served a six-game suspension last season. Peppers was part of the trade package for Odell Beckham Jr. and Olivier Vernon last offseason. Now Njoku may also be traded.

As COVID-19 continues to sweep the country, former Pittsburgh Steelers Head Coach Bill Cowher told The Athletic that he was among those affected.

Cowher, 63, said he and his wife, singer Veronica Stigeler, did not get tested when they had symptoms in March, but did test positive for the virus' antibodies in April.

After a Hawaii vacation, which replaced an originally-scheduled trip to Japan, the Cowhers flew into Newark Liberty International Airport and went out to restaurants in New York City before they began closing.

They realized something was wrong when they lost their sense of smell and taste. Cowher also told The Athletic that they had shaky joints. Cowher had a slight fever, and his wife had a dry cough. They both made a full recovery.

Still, Cowher is glad his Pro Football Hall of Fame induction has been postponed to next year, along with the entire Class of 2020.

"I'm really kind of relieved," Cowher said. "As much as you want to be reflective and talk about the people who were so instrumental in your life, now is not the time, not just with COVID but with the social justice issues. These are very transparent times and it's so fluid. The Hall of Fame needs to be reflective. ... I think right now it's just hard to really think about anything celebratory when the country is in the state it is."

The Bengals spent a whole lot of money on upgrading their defense this offseason, but one of their top additions still has not become official.

New cornerback Trae Waynes agreed to a three-year, $42 million deal, including a $15 million signing bonus, but he hasn't seen a cent of it because it hasn't been finalized due to COVID-19.

According to Sports Illustrated's Albert Breer, Waynes moved his family to Cincinnati in May to get them settled and in hopes of undergoing a physical that would complete the deal. However, the Bengals are one of many teams not allowing third-party physicals and won't let their team doctor do physicals at their private practice facility either.

"He moved to Cincinnati, bought a house there, brought his wife and two kids there for the sole purpose that he could drive down to a doctor's private office and get his physical and do a deal," said Brian Murphy, president of Athletes First, and Waynes's agent. "He's got no other reason to be in Cincinnati, because all the offseason workouts were via Zoom. But we thought if he went there, he could get the physical, and it turns out he can't."

The Bengals aren't unusual in how they are operating, but it's a snapshot into how odd, and frustrating for many parties involved, this offseason has been.

SEARCA to get behind regional coconut industry

WASHINGTON, DC - President Donald Trump interrupted his press briefing on the coronavirus on Tuesday night to enthuse over the ...

WASHINGTON, DC - The Trump administration said on Wednesday it was stepping up efforts to purge "untrusted" Chinese apps from ...