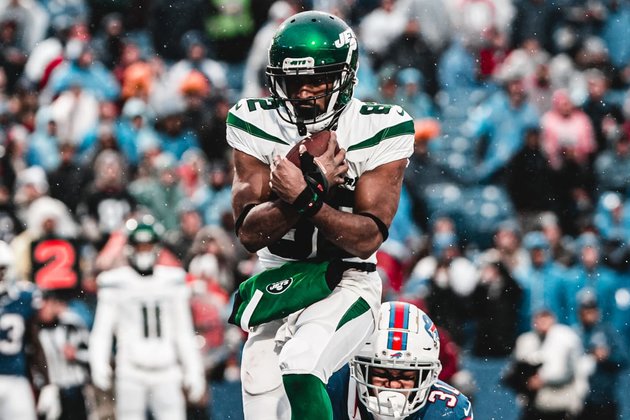 Jamison Crowder had a superb first season in green and white after coming over from Washington as a UFA. Crowder started with a bang when he caught 14 passes (for 99 yards) from Sam Darnold on opening day vs. Buffalo - the most receptions by a Jets receiver on opening day in franchise history. He didn't stay on his 224-catch pace for the season but did wind up leading the offense in targets (122), receptions (78), receiving yards (833), receiving TDs (6), receiving first downs (41) and total and receiving third-down conversions (19).

Braxton Berrios was among the top punt returners, finishing with 11.4 yards/return, 2nd in the NFL and 9th-best in Jets history (he also led the league with 32 fair catches), and added a 69-yard reception vs. Oakland. Vyncint Smith would've been 2nd in the league in KO returns with his 29.9-yard average but didn't qualify with only 10 returns. However, Vyncint showed he could contribute offensively with his 37-yard catch-and-run to set up the game-winning FG vs. Miami and his 19-yard end-around TD at Philadelphia.

The WRs room got some renovation. Robby Anderson, after being wooed to return by GM Joe Douglas, opted to depart as a UFA for Carolina, taking with him his 207 career catches for 3,059 yards and 20 TDs after arriving as an undrafted FA in '16. Douglas moved quickly to sign Breshad Perriman, who's been hot-hot-hot since the last quarter of 2018 at 17.9 yards/catch. (Also noteworthy: Since 1990, BP has the top average, 19.9 yards/catch, among all NFL receivers in the months of December/January.) Can Breshad replace Robby? We're about to see.

Also brought in as a veteran FA is Josh Doctson, the former first-round pick (22nd overall) of the Redskins in 2016 who lost almost all of last season to a hamstring injury in Minnesota. And leading the rookie/first year pack is second-round pick Denzel Mims, who put his size (6'3", 207) and speed (4.38 in the 40) on display with Baylor last year in grabbing 66 catches for 1,020 yards and 12 TDs.

Head coach Adam Gase got questions after the draft about whether the Jets had stockpiled enough offensive weapons. He preferred to look at his WRs as part of a package that may not yet be completed.

"I feel really good about where we are at right now," Gase said. "I know everyone keeps focusing on wide receiver, which I think is going to be a pretty good group. But I look at our tight ends, I look at our running backs. I feel like we are in a good spot and who knows what will be added from here on out. I think Joe has been fairly aggressive as far trading guys and trading for guys or having to make some kind of move where he has to pick somebody up because they get waived. We have a long way to go before we actually start the season, so you never know what kind of opportunities are going to come about."

SEARCA to get behind regional coconut industry

WASHINGTON, DC - President Donald Trump interrupted his press briefing on the coronavirus on Tuesday night to enthuse over the ...

WASHINGTON, DC - The Trump administration said on Wednesday it was stepping up efforts to purge "untrusted" Chinese apps from ...