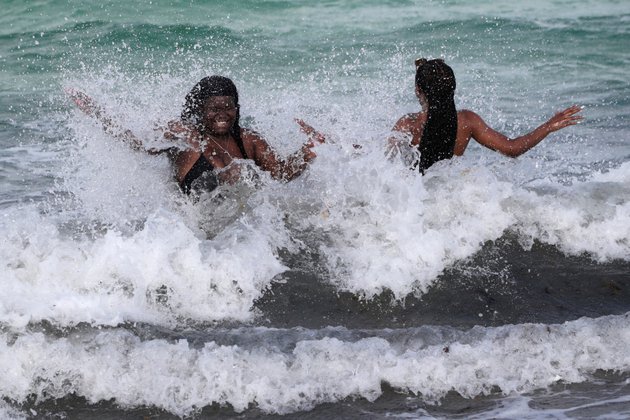 The southern U.S. states of Florida and North Carolina have declared hurricane warnings after Hurricane Isaias drenched the Bahamas and headed toward the U.S. East Coast.

Hurricane Isaias had sustained winds Friday of 120 kph and was expected to strengthen during the night, the U.S. National Hurricane Center in Miami said. The storm is currently a Category 1 hurricane with a chance of increasing to a Category 2, however the eye is forecast to stay in the Atlantic Ocean and not turn toward land.

"While current projections have the eye of Isaias remaining at sea, the situation remains fluid and can change quickly," Florida Gov. Ron DeSantis told a media briefing.

DeSantis issued a state of emergency for a dozen counties on the Atlantic Coast. Heavy rains from the storm are expected to begin in Florida late Friday and hit the Carolinas by early next week.

South Carolina Gov. Henry McMaster told reporters he did not think a state of emergency was necessary.

The hurricane has prompted authorities in parts of Florida to close coronavirus testing sites at a time when cases have been growing in the state.

DeSantis said testing sites would remain open on Florida's west coast as well as in some eastern hospitals and community centers.

Officials in Miami-Dade County said they do not believe it will be necessary to open evacuation centers for this storm but said 20 centers remain on standby in case conditions change.

In the Bahamas, officials evacuated people in Abaco and in the eastern end of Grand Bahama who have been living in temporary structures since Hurricane Dorian.

A man died in the Dominican Republic when he was electrocuted by a fallen electrical cable, according to the Associated Press.

U.S. President Donald Trump has signed an emergency declaration for Puerto Rico, which has yet to fully recover from 2017's Hurricane Maria and a recent series of earthquakes.

Isaias is the ninth named storm of a busy Atlantic hurricane season. This is the earliest date a storm beginning with the letter "I" has formed.

NEW YORK, New York - U.S stocks faltered on Friday despite better-than-expected jobs growth in July, and a rebound in ...

Switch is the latest data centre operator to post strong financial results as the global Covid-19 pandemic continues to fail ...

Seventeen dead, 123 injured as jet breaks in two on landing in India

DUBAI, UAE - An Air India Express flight from Dubai with 190 people on board skidded off a runway and ...