TORONTO, ON / ACCESSWIRE / October 13, 2020 / Aston Bay Holdings Ltd. (TSX-V:BAY; OTCQB:ATBHF) ('Aston Bay' or the 'Company') is pleased to present assay results from the recently completed Phase 2 diamond drill program at its Buckingham Gold Property located in Central Virginia, USA. Phase 2 of the 2020 Buckingham drill program comprised seven (7) large diameter (HQ) oriented diamond drill holes totaling 803 metres (m), which added to the 1,218 m drilled in ten holes in the first phase of the program in March; results from two of these holes have been previously reported (see August 4 and 10, 2020 Aston Bay press releases). The significant gold intersections from the final five Phase 2 drill holes are presented in Table 1; intersections from all Buckingham Vein drill holes are presented in Table 2.

Drill hole locations with the significant gold intercepts can be seen in Figure 1 and in a longitudinal cross section in Figure 2. Refer to the July 27, 2019 and August 5, 2020, Aston Bay news releases for additional information on previous drilling.

'Our drill programs confirm a high-grade, at-surface gold vein system at Buckingham as well as an adjacent wider zone of lower-grade disseminated gold mineralization,' stated Thomas Ullrich, CEO of Aston Bay. 'With almost no rock outcropping at the surface, this discovery is a testament to the exploration expertise of Don Taylor and his team and confirmation of their exploration thesis for gold in Virginia. This is just one of several targets in the region generated by that team, most of which are still to be investigated.'

'The next step is to examine the potential subsurface extents of the Buckingham Vein, so we are excited to follow up this discovery with an Induced Polarization geophysical program to delineate anticipated down-dip and along-strike extensions. In addition to Buckingham, we plan to conduct similar geophysical programs this fall on two other properties where shallow pre-1850 mining also confirms the existence of near-surface gold. We are eager to see the results of using modern geophysical methods on the three properties, methods that were unavailable to the historic explorers, and to follow up those results with drilling.'

About the Buckingham Main Zone

Discovered by prospecting in 2015 following up on a gold anomaly from a 1996/97 stream sediment survey, the NW-SE trending Buckingham Main Zone comprises a series of visible gold-bearing quartz vein outcrops that extend over a strike length of some 150 m at surface and have yielded grab sample assay values up to 701 grams per tonne (g/t) Au. Three core holes drilled on the vein in 2016 yielded significant core-length intercepts of 17.1 g/t Au over 1.98m (WAR16-06) and 24.3 g/t Au over 2.59m (WAR16-05).

In this recently completed Phase 2 drilling, four of the drill holes (BUCK-018 through BUCK-021, see Figure 1) targeted the along-strike projection of the Buckingham Vein; all four holes intersected quartz vein material indicating an along-strike extension of 150 m from the 2019 drilling for a total known strike length of over 200 m for the vein. Three of the drill holes intersected gold mineralization in the quartz vein: 33.50 g/t Au over 1.29 m in BUCK-018, 1.40 g/t Au over 2.75 m including 2.90 g/t Au over 1.25 m in BUCK-019 and 6.56 g/t Au over 2.18 m in BUCK-020. BUCK-021 intersected quartz vein material over 1.08 m core length approximately 25 m vertically below the gold-bearing quartz vein intersection in BUCK-020; the BUCK-021 yielded no significant gold, however.

A table with significant intersections from all drill holes at the Buckingham Vein and surrounding zones of disseminated mineralization in the larger Buckingham Main Zone is presented in Table 2.

The gold-bearing system at the Buckingham Project is hosted within a package of likely late Precambrian or early Cambrian-age sediments, including greywackes with minor quartz-arenites (phyllite, schist and quartzites), within the Appalachian orogenic belt, hosting past producing mines, current gold mines and advanced gold exploration plays in a belt from Georgia, the Carolinas, Virginia, Nova Scotia and through to Newfoundland. This region is the site of the historically prolific Virginia Gold-Pyrite Belt which hosted a reported 250 gold mines that were in production prior to the California gold rush of 1849 but has seen little recent mineral exploration. Gold production has also occurred to the south in the Carolina Slate Belt, notably at OceanaGold's Haile Mine located in South Carolina with commercial production commencing in 2017 and slated to produce up to 150,000 ounces of gold per year.

In addition to the 4,953 acres surrounding the Buckingham vein, Aston Bay has exploration agreements in place for 4,399 acres of private land surrounding several historical gold mine workings and other prospective areas in Virginia. A prospecting program, including surface rock and soil sampling, has been completed on parcels of land located over and adjacent to two historic past-producing in the area, with results from 194 soil and rock samples pending. Continued exploration in these and other brownfields areas is planned throughout the summer and fall.

Samples from the Company's 2020 Buckingham drill program were shipped to the ALS Laboratory in Vancouver, BC for analysis. A secure chain of custody was maintained, and the program included a comprehensive QAQC program, which did not identify any preparation or analytical issues 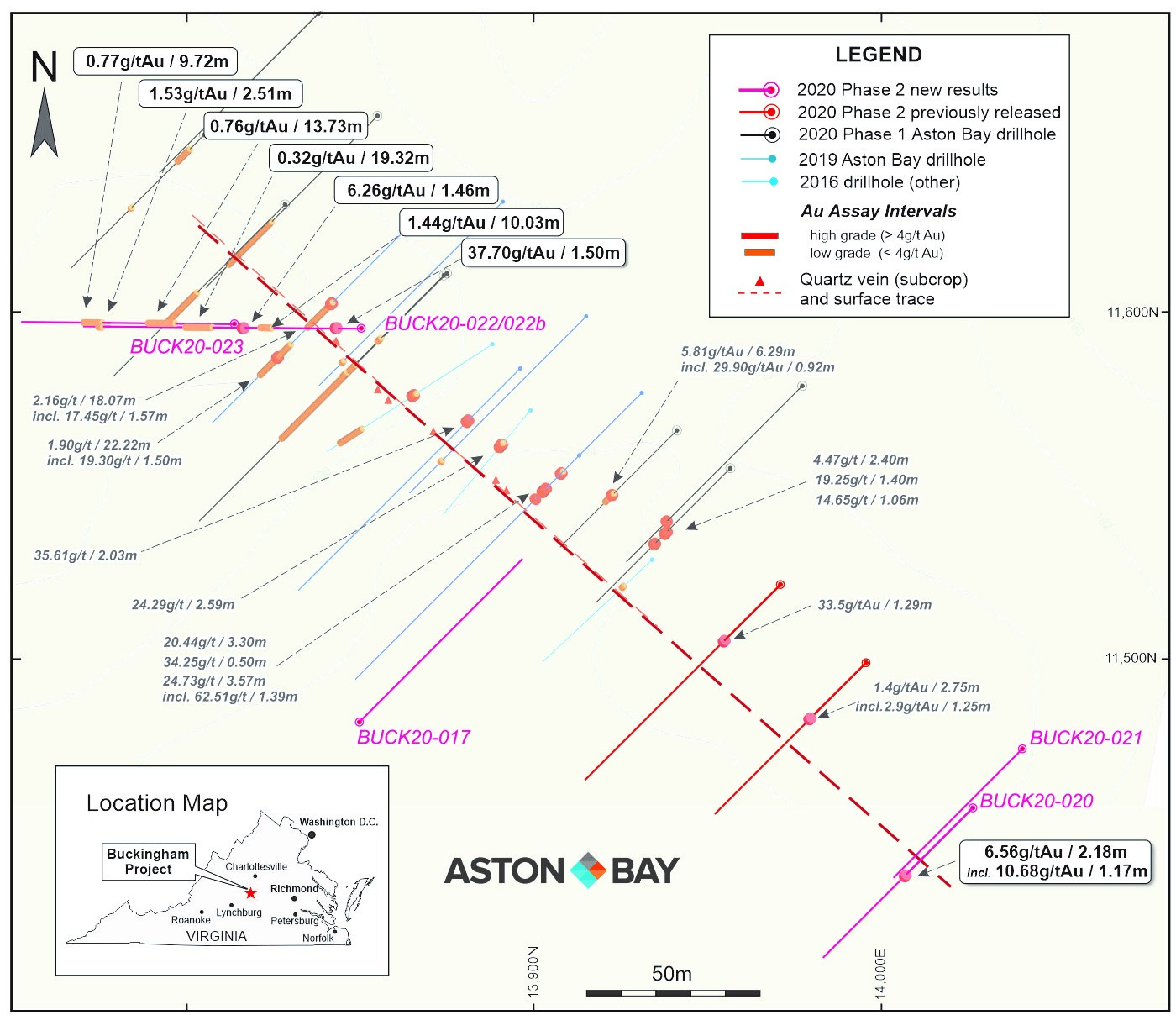 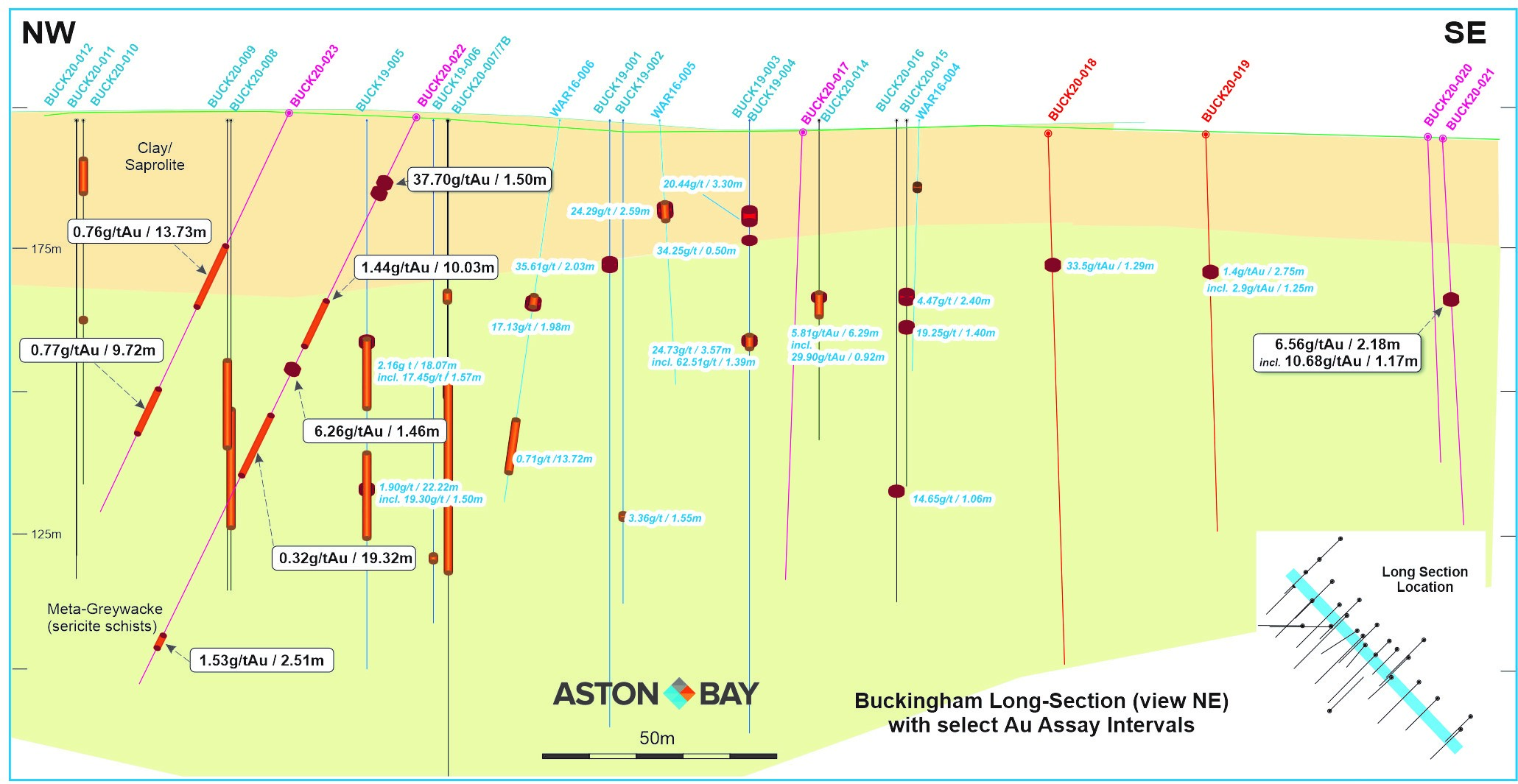 As per National Instrument 43-101 Standards of Disclosure for Mineral Projects, Andrew Turner, P.Geol., a consultant to Aston Bay, is the Qualified Person for the Company and has prepared, validated and approved the technical and scientific content of this news release. The Company strictly adheres to CIM Best Practices Guidelines in conducting, documenting, and reporting its exploration activities.

Aston Bay is a publicly traded mineral exploration company exploring for gold and base metal deposits in Virginia, USA, and Nunavut, Canada. The Company is led by CEO Thomas Ullrich with exploration in Virginia directed by the Company's advisor, Don Taylor, the 2018 Thayer Lindsley Award winner for his discovery of the Taylor Pb-Zn-Ag Deposit in Arizona.

The Company has acquired the exclusive rights to an integrated dataset over certain prospective private lands and has signed agreements with timber and land companies which grants the company the option to lease the mineral rights to 11,065 acres of land located in central Virginia. These lands are located within a gold-copper-lead-zinc mineralized belt prospective for Carolina slate belt gold deposits and Virginia gold-pyrite belt deposits, as well as sedimentary VMS, exhalative (SEDEX) and Broken Hill (BHT) type base metal deposits. Don Taylor, who led the predecessor company to Blue Ridge and assembled the dataset, has joined the Company's Advisory Board and will be directing the Company's exploration activities for the Blue Ridge Project. The Company is actively exploring the Buckingham Gold Project in Virginia and is in advanced stages of negotiation on other lands in the area.

The Company is also 100% owner of the Aston Bay Property located on western Somerset Island, Nunavut, which neighbours Teck's profitable, past-producing Polaris (Pb-Zn) Mine just 200km to the north. The Aston Bay Property hosts the Storm Copper Project and the Seal Zinc Deposit with drill-confirmed presence of sediment-hosted copper and zinc mineralization.

The Company's public disclosure documents are available on www.sedar.com.

WASHINGTON, DC - There will be no new coronavirus economic relief package in the U.S. before next Tuesday's presidential and ...

OTTAWA, Canada - Five major aerospace companies in Canada and Boeing have inked an agreement which will see a multi-decade, ...

WASHINGTON, DC - The U.S. Federal Communications Commission (FCC) is proposing a rule change that would require television and radio ...

NICE, France - A man wielding a knife on Thursday killed three people in an attack at the Basilica of ...

Golfing great comes out in support of Trump re-election

Snowden, hero to many, traitor to others, is awarded Russian residency

Chinese stocks gain for third day in row, most other Asian markets dip

SYDNEY, NSW, Australia - Asian investors on Thursday ignored the ructions overnight on Wall Street and around the globe, keeping ...

Britain and India shore up economic and financial ties

LONDON, UK - Britain and India entered into a range of agreements on Wednesday to solidify their relationship and promote ...

Won't You Be My Neighbor?