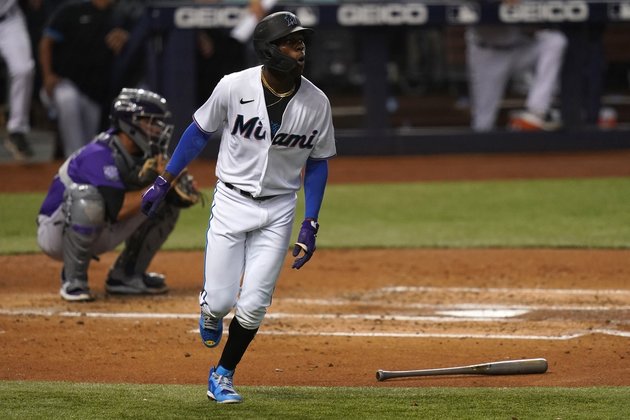 Adam Duvall, Jazz Chisholm Jr. and Starling Marte homered during a six-run second inning, leading the host Miami Marlins to an 11-4 win over the Colorado Rockies on Thursday night.

Colorado is now 5-24 away from home, the worst road record in the majors.

The good news for the Rockies was the return of two-time All-Star shortstop Trevor Story, who went 1-for-3 with one walk and one run scored. He had been out since May 27 due to an elbow injury.

Rogers, who was named the National League's Rookie of the Month for April and May, pitched six scoreless innings before running into trouble in the seventh. In total, he allowed two runs on four hits with one walk while striking out eight. His ERA, which was fifth-best in the NL at 1.97 to start the night, went up slightly to 2.02.

Gonzalez fell behind the Marlins after Corey Dickerson singled to lead off the second, and Duvall followed with his 11th homer of the season and his second in two days. Gonzalez was one strike from exiting the inning trailing only 2-0 when Chisholm hammered a three-run homer -- a shot that carried 431 feet to make it the longest blast in Miami this year.

Marte capped the scoring in the inning with his homer just four pitches later.

Miami extended its lead to 8-0 in the fifth inning. Jorge Alfaro had a two-out double and scored on Jose Devers' single. Jon Berti followed with an RBI double.

Colorado finally got on the board in the seventh inning on Brendan Rodgers' solo homer. Story followed with an infield single, went to third on Ryan McMahon's double and scored on Yonathan Daza's RBI groundout.

WASHINGTON, D.C.: The U.S. Federal Communications Commission is moving forward in banning the purchase of equipment by U.S. telecommunications networks ...

In move to expand in UK, JPMorgan purchases Nutmeg platform

LONDON, England: In a major move to enter the British retail banking and investment market, JPMorgan Chase has purchased British ...

Over 1,000 flights delayed due to Southwest Air computer glitches

TOKYO, Japan: Exports from Japan have registered the fastest growth since May 1980, as inoculations against the Covid infection revved ...

HONG KONG: The pro-Democracy Apple Daily newspaper saw its top executives arrested, along with a raid on the newsroom by ...

AUSTIN, Texas: Amidst an ongoing severe drought, Texas and California officials have asked residents to conserve energy this week, in ...

NAIROBI, Kenya: COVID-19 cases jumped over 20 percent in the past week in nearly two dozen African countries, according to ...

WASHINGTON, D.C.: Lina Khan, an antitrust researcher focused on Big Tech's massive power, was sworn in as chair of the ...

MOSCOW, Russia: In a further tightening of its control over foreign social media platforms, the Russian parliament has passed legislation ...