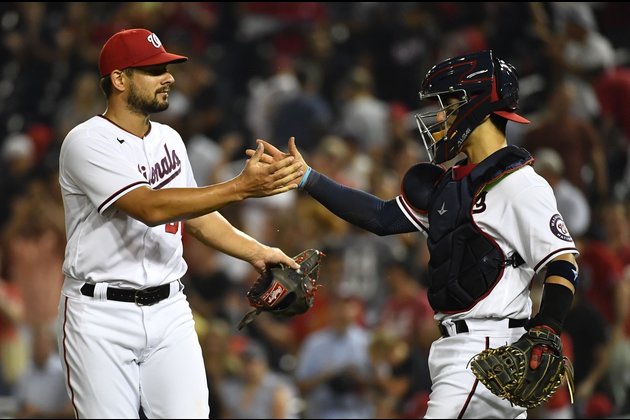 The Washington Nationals will shoot for a much-needed sweep of the visiting Miami Marlins when the teams meet in the finale of their three-game series Wednesday night.

Washington has won three straight, including the first two of a six-game run in which they will oppose two last-place teams, theMarlins and the Baltimore Orioles. The Nationals are trying to get in the thick of the National League East race as the trade deadline approaches.

"Trade-deadline time is always a decision-making time here," Washington general manager Mike Rizzo said Tuesday. "In the past, we've usually been a buy-first team because we're in the midst of trying to win championships. I think we still feel that way as of right now, today."

Trying to keep that feeling alive Wednesday will be Nationals right-hander Erick Fedde (4-7, 5.32 ERA). He is looking to bounce back from his Friday start, when he allowed six runs on three hits and four walks in 1 1/3 innings of a 24-8 loss to the San Diego Padres.

"Starting off both innings with (walks) is not ideal, but I think it just kind of set the tone in the wrong way," Fedde said. "Free bases definitely aren't the way to start the game."

He is 2-0 with a 1.17 ERA in three career starts vs. Miami, the last one coming in September 2020, when he pitched six scoreless innings of one-hit ball.

Fedde was slated to face off Wednesday against Sandy Alcantara, but the Marlins right-hander was placed on bereavement leave Tuesday. Manager Don Mattingly said the team would bring in someone to make the start.

The Marlins got a solid start from All-Star Trevor Rogers and a three-run homer from Adam Duvall but lost to the Nationals 6-3 on Tuesday. Miami has dropped four straight and eight of 10 as it tries to remain relevant prior to the deadline.

Miami rallied from a 2-0 deficit and led 3-2 thanks to Duvall's sixth-inning shot, but the Nationals put up three runs in the bottom of the inning to retake the lead.

"Obviously we get a lead and kind of give it right back," Mattingly said. "That's frustrating for our club."

Richard Bleier, who had a string of 12 straight scoreless appearances, was tagged for three runs and the loss. As he left the game, he argued that Alcides Escobar had swung at the pitch that hit him. Bleier continued to argue from the dugout and was ejected.

"It's been a frustrating stretch for everyone involved, and the only thing we can do is move forward," Bleier said, echoing Mattingly's description.

On a positive note, after sitting out the Monday game with a sore shoulder, Miami center fielder Starling Marte returned and went 2-for-4 with a run.

With Nationals outfielder Kyle Schwarber, catcher Yan Gomes and pitcher Stephen Strasburg among those on the shelf, Rizzo said the pressure is on star players such as Trea Turner and Juan Soto. The pair produced back-to-back RBI singles in the crucial sixth inning Tuesday.

NEW YORK, New York - U.S. stocks fell across the board on Friday with Amazon a stand-out for sellers. The ...

Amazon says it will not accept bitcoin for online payments

SEATTLE, Washington: Amazon.com denied media reports on July 26 that the company was considering accepting bitcoins as a form of ...

SANTA CLARA, California: Hoping to regain its lead by 2025 and catch up to rivals, such as Taiwan Semiconductor Manufacturing ...

SYDNEY, NSW, Australia - There was wholesale selling of stocks on Asian markets on Friday with the technology sector coming ...

PALESTINIAN TERRITORIES - A 20-year old Palestinian youth was shot dead by Israeli army soldiers on Thursday as he attended ...

WASHINGTON, D.C.: Due to the spread of the Covid Delta variant, the United States will not lift the existing travel ...

Blinken meets representative of Tibet government in exile in India

NEW DELHI, India: China is expected to deliver an angry response to a meeting U.S. Secretary of State Antony Blinken ...