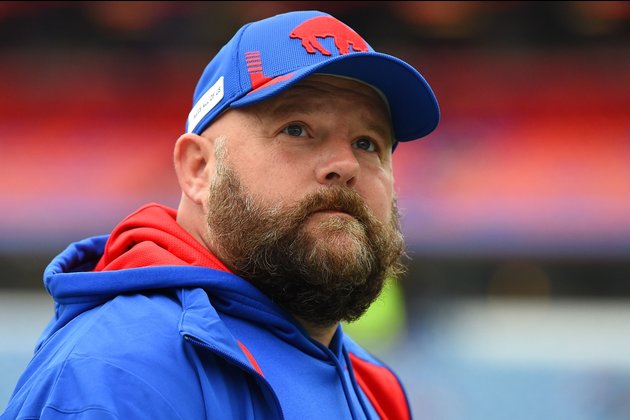 New York Giants co-owner John Mara vowed to take his time in rebuilding the team's leadership from "the ground up" after firing coach Joe Judge on Tuesday.

That was immediately followed by another word: "again."

Judge became the third consecutive coach to be fired by the Giants after only twoseasons at the helm. And his departure came a day after embattled general manager Dave Gettleman announced his retirement.

Mara and co-owner Steve Tisch began interviewing general manager candidates Wednesday and plan to fill that void first. That GM will be tasked with rebuilding a team that has reached the playoffs just once since winning the Super Bowl after the 2011 season.

While the GM has yet to be identified, the early list of favorites to replace Judge is heavy on respected offensive minds.

Daboll was installed as the 350 favorite by BetMGM, and those odds have shortened to 325 as he leads with 30.8 percent of the bets and an overwhelming 70.1 percent of the early money wagered at the sportsbook. It helped that Bills assistant GM Joe Schoen was the first to interview with the Giants on Wednesday.

Pederson has the second-shortest odds at 400, followed by former Miami Dolphins coach Brian Flores, who has moved from 500 to 550 despite being tied with Daboll with 30.8 percent of the early tickets backing him.

Flores is a Brooklyn native who was a long-time assistant for the Patriots. Then again, Judge also came from the Bill Belichick coaching tree.

Bieniemy, who interviewed for the Giants' job two years ago, is 600 followed by Leftwich and current Michigan head coach Jim Harbaugh at 700. McDaniels is being offered at 800 followed by current Giants defensive coordinator Patrick Graham at 900. Graham is close to Judge and is considered a longshot.

Three other names that could quickly emerge depending on the GM hire are Dallas Cowboys offensive coordinator Kellen Moore and defensive coordinators Todd Bowles (Tampa Bay) and Dan Quinn (Dallas). Each currently has 1000 odds at BetMGM.

Daboll is the sportsbook's biggest liability with the heavy early action supporting him. Harbaugh is third with 15.4 percent of the bets, while Leftwich had the third-most money backing him at 8.5 percent compared to Harbaugh's 5.0.

All of the losses and uncertainty created a fan base short on patience and trust. Mara said he grasps that he hasn't given fans a reason to believe the Giants will get it right, and senses the franchise has a bridge to rebuild with fans.

"That's not going to happen overnight," he said.

PARIS, France: After Paris changed its travel restrictions, announcing that UK travellers would only need to present a negative Covid-19 ...

NEW DELHI, India: The first day of talks between the UK and India on a potential free trade agreement took ...

At auction, $3.3 million paid for single page of Spiderman comic

DALLAS, Texas: The original drawings of a single comic book page from a 1984 issue of Spiderman has sold for ...

LOS ANGELES, California: Netflix has raised its monthly subscription price from $13.99 to $15.49 per month in the United States. ...

LONDON, England: The large British energy firm E.ON Next has delivered an apology after sending warm socks to 30,000 customers ...

KIEV, Ukraine: Many government websites in Ukraine have suffered cyberattacks, with the intruders posting the text, "Be afraid and wait ...

BRUSSELS, Belgium: Zara Rutherford, a teenager from Belgium, is nearing the completion of a solo round-the-world flight. Rutherford, age 19, ...

FedEx asks US to let it install laser defenses to planes

MEMPHIS, Tennessee: FedEx is seeking permission to arm its cargo planes with defensive systems to thwart attacks by heat-seeking missiles. ...

Not since the 1936 Olympics in Berlin has a government tried to prevent an athlete from competing in a sporting ...

Diamonds of the Night (Dmanty noci)