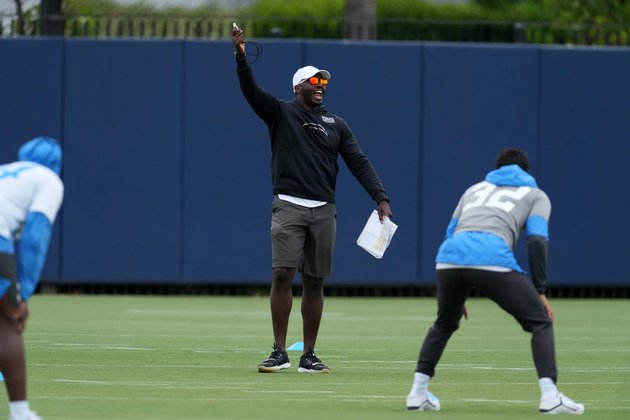 Swinton was informed of the move Thursday night by head coach Brandon Staley, who was hired one year ago and pinpointed special teams as an area to address.

At his season-ending media session on Monday, Staley said measured progress was made by the Chargers' special teams units, but more improvement is needed.

"I think that there was progress made," Staley said. "I think there's a lot of work to do in terms of being a consistent team and being the type of team that we expect to be. I think, like you said, a lot of it is teaching and development, getting people in the right roles, establishing the depth that you need on teams in order to be successful. I think that it's a work in progress. I think that we definitely made improvements in trying to create a culture there, but there is a lot of work to do."

Swinton, 36, has 12 years experience coaching special teams in the NFL.

Dustin Hopkins took over as kicker for Tristan Vizcaino and the Chargers released Michael Badgley after a rough training camp. He latched on with the Colts and could remain with Indianapolis long-term.

Hopkins made all 17 field goal attempts inside of 50 yards. Ty Long averaged 45.5 yards per punt.

Wide receiver Andre Roberts had a 101-yard kickoff return for a touchdown against the Denver Broncos and averaged 32.8 yards on 19 attempts.

LOS ANGELES, California: Netflix has raised its monthly subscription price from $13.99 to $15.49 per month in the United States. ...

LONDON, England: The large British energy firm E.ON Next has delivered an apology after sending warm socks to 30,000 customers ...

ATLANTA, Georgia: With a business slowdown caused by a COVID-19 surge in December, Delta Air Lines lost $408 million in ...

Not since the 1936 Olympics in Berlin has a government tried to prevent an athlete from competing in a sporting ...

TOKYO, Japan: Twin panda cubs have made their first public appearance before devoted fans at Ueno Zoo in Tokyo. However, ...

TEL AVIV, Israel: An avian influenza upsurge has claimed the lives of over 5,000 cranes in Israel, resulting in the ...

WARSAW, Poland: Poland has emerged as the most recent country in Europe to have reported 100,000 fatalities linked to COVID-19, ...

LONDON, England: A rare warning by the UK's MI5 intelligence agency has revealed that a Chinese agent, Christine Ching Kui ...