After weathering win over Nationals, Phils look to keep rolling 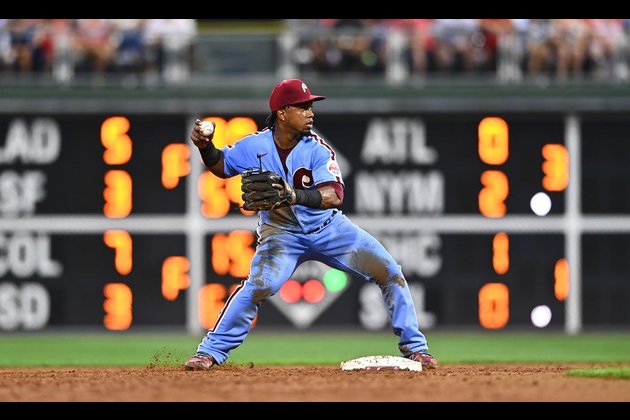 The Philadelphia Phillies never had to return for the bottom of the fifth inning on Thursday.

They were ahead 5-4 in an official game before the rain and lightning began. After a two-plus-hour delay, the game became final and the Phillies were fortunate to capture the opener of a four-game seriesover the Washington Nationals.

Instead of playing into the wee hours of Friday morning, the Phillies were awarded a victory, and now they will look for another win when they host the Nationals again on Friday.

Philadelphia has won two in a row and seven of its past eight games.

"We knew it was imminent," Phillies interim manager Rob Thomson said of the bad weather that was in the forecast before the game started. "Thank God we got through it."

Philadelphia's Jean Segura made his long-awaited return from a broken right index finger and played for the first time since May 31, going 0-for-2. Earlier in the day, the Phillies released Didi Gregorius.

The move signified that Bryson Stott will be the everyday shortstop moving forward.

"Didi was really kind of the odd man out," Thomson said. "That doesn't mean he's a bad player, because he's played very well at shortstop for us. He just didn't hit the way that he normally hits."

The Phillies will hand the ball on Friday to Kyle Gibson (6-4, 4.60 ERA), who missed one start while on the bereavement list. In Gibson's previous outing against the Atlanta Braves, he allowed four hits and two runs in six innings in a July 27 win.

In two career starts against the Nationals, Gibson has struggled mightily with an 0-2 record and a hefty 14.09 ERA. In 7 2/3 combined innings, Gibson has given up 15 hits and 13 runs, 12 earned.

Not much has gone right for the Nationals this season. They enter Friday's game at 36-71, the worst mark in the majors. They are 9-39 against the National League East.

Without Juan Soto and Josh Bell, who now play for the San Diego Padres following a massive deal before the trade deadline, the Nationals clearly don't have the same roster.

However, Luke Voit provided a spark with two hits, a run and an RBI in the Thursday loss. Voit was the first player to be added to the active roster since the trade.

"Obviously, it was fun being in that playoff rush with San Diego," Voit said. "I know we're out of it already here. But obviously, we've got 60-ish games left, so you've got to make the most of it. I'm excited to learn a lot about these new teammates, coaches. I'm going to go out there and be a blue-collar guy, work my butt off and try to get as many wins as we can for this team."

Josiah Gray (7-7, 4.59 ERA) is scheduled to start on Friday for the Nationals. Gray allowed five hits and four runs in five innings in his last start, a loss to the St. Louis Cardinals on Sunday.

Gray is 1-1 with a 3.86 ERA in four career starts against the Phillies.

"It's a matter of continuing to work ahead," Gray said after his last outing. "Being competitive in the zone. I wasn't as sharp as I could be tonight, unfortunately, so the pitch count got up there early on. Some things to work on."

Washington designated hitter Nelson Cruz (neck) remained out of the lineup on Thursday for the second straight day. It was unclear if Cruz would be ready to play on Friday.

Noodle makers ask to increase prices after 14-years in Thailand

BANGKOK, Thailand: Instant noodle makers have asked Thailand to allow them to increase their prices to meet rising costs, which ...

U.,S. stocks back on the defensive, Nasdaq drops 164 points

Thailand to spend $62 billion to build industry in east

BANGKOK, Thailand: Thailand seeks to invest $61.97 billion in its industrial eastern region over the next five years, in a ...

JEDDAH, Saudi Arabia: In a Twitter post published this week, Saudi Arabia's Kingdom Holding said it had invested in Russian ...

Asian stocks rally across the board, Nikkei 225 surges 354 points

DHAKA, Bangladesh A preliminary investigation into the tragic crane accident that killed five people in Uttara on Monday has found ...

Would a new Cold War be in the best interest of the United States?

As China unleashed live-fire military exercises off the coast of Taiwan, simulating a real "reunification by force" operation in the ...

NAYPYIDAW, Myanmar - According to a legal official, a court in Myanmar has sentenced former leader Aung San Suu Kyi ...

BEIJING, China: Following a meeting between their foreign ministers, China and Nepal have agreed to build the Trans-Himalayan Multi-Dimensional Connectivity ...

SACRAMENTO, California: California Governor Gavin Newsom is proposing to give a $1.4 billion government loan to extend the life of ...

NEW DELHI, India: A government order released to reporters this week said New Delhi will continue to enforce a mask ...