Top of the order leads Rays over Blue Jays 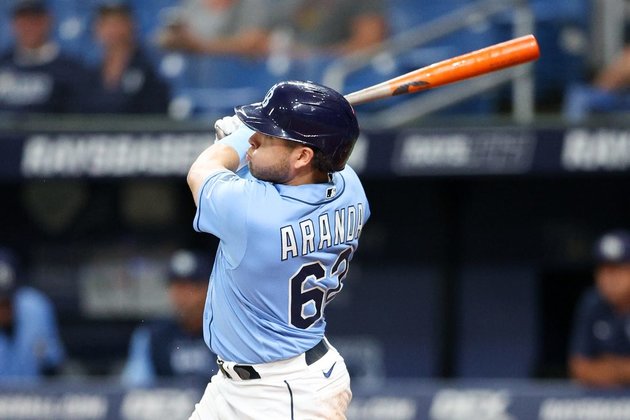 Rookie Jonathan Aranda hit a leadoff homer and scored three runs and Tampa Bay's offense came alive with nine runs in the first four innings as the Rays ran away from the Toronto Blue Jays 10-5 on Thursday in St. Petersburg, Fla.

The Rays (83-67) scored just two runs over three straight home losses to Houston, but they opened their final home series of the season with the top of the order producing against Toronto starter Jose Berrios (11-6).

Aranda went 2-for-4 with three runs, an RBI and a walk. Wander Franco had two hits, three RBIs and a run.

In all, the top five hitters in the order posted 11 of the 12 hits, eight runs and nine RBIs.

Bulk-innings reliever Ryan Yarbrough (3-8) followed opener JT Chargois, but Yarbrough left in the third with right side discomfort, after one inning pitched.

The win pulled the Rays to within one game of the top American League wild-card spot, held by Toronto (84-66).

Vladimir Guerrero Jr. was 0-for-3 with a walk to end his 14-game hitting streak -- the AL's longest run.

Springer opened with a triple to left and scored on Bichette's 42nd double.

In the second inning, Hernandez and Merrifield each hit long shots to left off Yarbrough to tie it.

The home side took a 6-3 lead on two-out RBI singles by Margot, Franco and Arozarena in the bottom half -- all off Berrios.

They created even more separation in the fourth when Franco's two-run double and Peralta's RBI infield single made it 9-3.

Peralta added another RBI on a double to score Arozarena in the sixth.

Merrifield's two-run blast in the ninth rounded out the scoring.

US 50 states agree to standardized connections at EV charging stations

WASHINGTON D.C.: The U.S. Department of Transportation has approved the electric vehicle charging station plans in all 50 American states, ...

BEIJING, China: During a ceremony this week, China certified its C919 narrow-body passenger jet, which is part of the country's ...

NEW YORK, New York - It was another volatile day on Wall Street on Friday as investors weighed up more ...

Asian stocks close out month and quarter on dismal note

SYDNEY, NSW, Australia - Asian stocks closed out the month and the quarter on a dismal note Friday."The 'troubling triad' ...

With eye on competition, Tata Motors selling $10,000 EV in India

NEW DELHI, India: As it seeks to attract more buyers, Tata Motors, the country's only electric vehicle maker, has introduced ...

US claims American-JetBlue alliance is anti-competitive

BOSTON, Massachusetts: The U.S. Justice Department has asked a Boston judge to force American Airlines and JetBlue Airways to scrap ...

Abortion regardless of marital status legalized by India's top court

NEW DELHI, India: In a decision widely hailed by women's rights activists, India's top court upheld the right of a ...

Another delay for US moon rocket as hurricane approaches Florida

CAPE CANAVERAL, Florida: NASA has announced that it will roll its giant moon rocket, the Space Launch System, off its ...

MIAMI, Florida: As Hurricane Ian crashes across the Caribbean, bringing high winds and torrential rains, Florida residents are scrambling to ...

KRAKOW, Poland: Organizers said an April Roger Waters concert planned in Krakow, Poland, has been canceled due to Waters' support ...

TEL AVIV, Israel - The Israeli army has approved using drones to carry out assassinations in the West Bank.The extraordinary ...