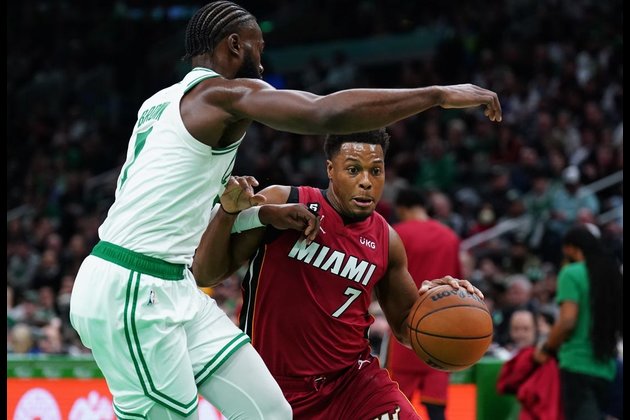 Jayson Tatum scored a season-high 49 points, and the Boston Celtics extended their winning streak to five games with a 134-121 victory over the visiting Miami Heat on Wednesday night.

The loss dropped Miami's road record to 2-8. The Celtics are unbeaten in their last 10 home games.

Tatum made eight of his 12 3-pointers, and also had a game-high 11 rebounds.

Adebayo was ejected after he was called for two technical fouls with 24 seconds to play.

The Heat lost despite making a season-high 18 3-pointers. Boston was 22-for-45 from behind the 3-point arc.

Miami was within three points midway through the fourth quarter, but the Celtics regained a 10-point lead, 131-121, on a Tatum 3-pointer with 2:21 to play.

Miami was without Jimmy Butler, who has missed the last seven games with a lingering knee injury. Butler is a six-time All-Star who is averaging 20.9 points, 6.6 rebounds, 6.1 assists and 1.8 steals per contest in 13 games this season.

Miami, which trailed 102-96 after three quarters, entered the game on a three-game winning streak.

Tatum led all players in points (28) and rebounds (six) in the first half.

The teams will meet again Friday night in Boston.