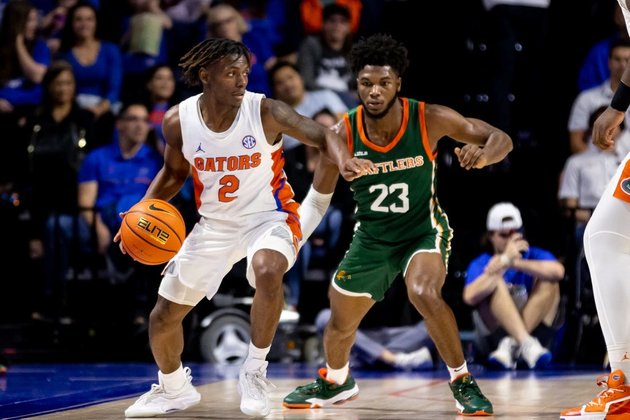 Trey Bonham led five double-figure scorers for Florida with 23 points, lifting the Gators to a 102-62 win over Florida AM on Wednesday in Gainesville, Fla.

Bonham went 7 of 8 from the floor and 7 of 7 from 3-point range. He also had four assists and two steals in 24 minutes.

The Gators (5-3) bounced back from losing two of three games at the Phil Knight Legacy event in Portland, Ore., last week. Florida was coming off an 84-55 defeat to West Virginia on Sunday, its worst loss in 23 years.

Reeves didn't play in two of the three games in Portland due to a coaching decision but started against Florida AM and made the most of his opportunity.

Reeves scored five points and Bonham had six points during an early spurt that gave the Gators a 19-2 lead. Florida maintained its double-digit edge for the rest of the half despite being outrebounded 16-10.

Florida was down its starting backcourt, as Will Richard and Kyle Lofton both sat out the game with injuries. Richard was sidelined because of a knee bruise, while Lofton sat due to back spasms.

Byron Smith led Florida AM (1-5) with 20 points, and Jaylen Bates added 14 points. The Rattlers shot just 34.5 percent from the field and turned the ball over 19 times, resulting in 29 points for the Gators.

Florida improved to 12-0 in its all-time series against Florida AM and 11-0 against the Rattlers at home.