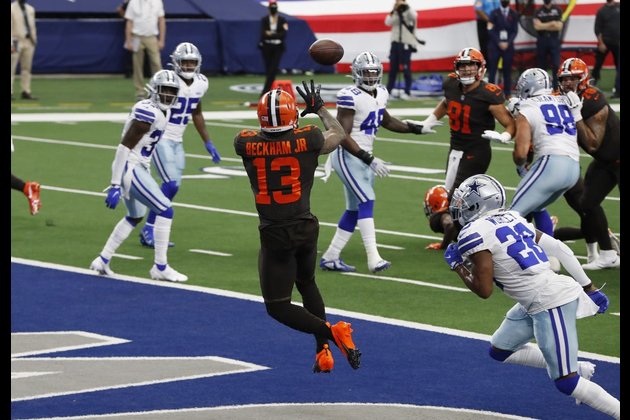 With more salary cap space, wins and warm winter days than the New York Giants, the Cowboys are emerging as the leaders in the pursuit of free agent wide receiver Odell Beckham Jr.

A drumbeat that began with Cowboys owner Jerry Jones weighing the idea in a radio interview grew to a full ensemble with quarterback Dak Prescott and running back Ezekiel Elliott joining in the Dallas chorus singing Beckham's praises.

Cowboys head coach Mike McCarthy confirmed Beckham is scheduled to visit the team facility on Monday and, like Jones, didn't hide his opinion on the topic.

"Hopefully an agreement can be worked out. I think it'll be great to get him in the building," McCarthy said Friday.

Beckham was removed from a flight out of Miami when the crew noted he was "in and out of consciousness" but Jones said that matter is not of any significance to the Cowboys.

Dallas has an 8-3 record and plays three AFC South teams with nine combined wins in the next three weeks before what could be a division-deciding contest with the Philadelphia Eagles on Christmas Eve.

The Cowboys have competition in the Beckham bidding. But Dallas has $6.3 million available under the salary cap, more than the Giants or Bills combined, and Beckham reportedly prefers a warmer climate as he completes his rehab from a torn ACL in the Super Bowl in February.