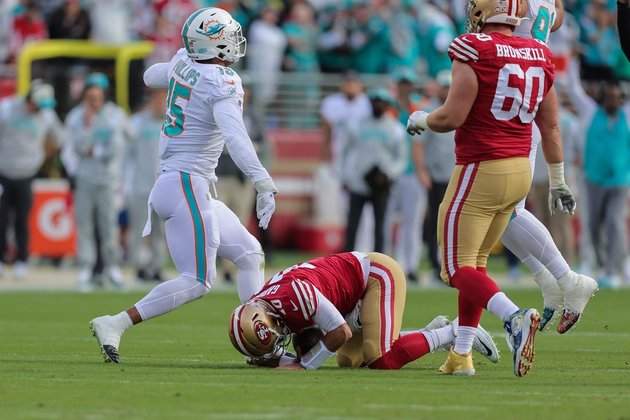 San Francisco 49ers quarterback Jimmy Garoppolo was carted to the locker room after the team's opening drive Sunday and was listed as questionable to return with an ankle injury.

The injury adds to the quarterback concerns for the 49ers, who lost Trey Lance for the season during San Francisco's second game. Lance subsequently underwent surgery for his own ankle injury.

Garoppolo was 2-of-4 passing for 56 yards on San Francisco's opening drive when he was sacked by a pair of Miami defensive players. The knee of Dolphins linebacker Jaelan Phillips appeared to land on the side of Garoppolo's left foot.

On the following play, the 49ers' Robbie Gould kicked a 47-yard field goal as San Francisco answered an opening-drive touchdown by the Dolphins.

The 49ers turned to rookie Brock Purdy at quarterback and the seventh-round pick out of Iowa State in April's NFL draft led San Francisco to a TD on his first drive. Purdy hit Kyle Juszczyk on a 3-yard TD pass to cap the 54-yard drive, for his first career scoring pass.