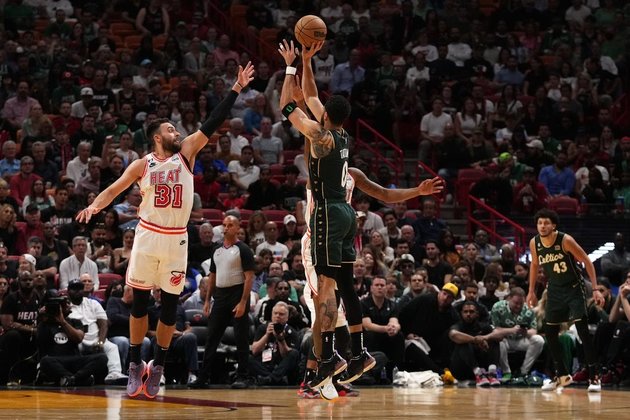 Bam Adebayo had 30 points -- including the go-ahead jumper in the lane with 20.4 seconds left -- to lead the host Miami Heat to a 98-95 win over the Boston Celtics on Tuesday night in South Florida.

Miami is 11-5 over its past 16 games. The Heat have also won five straight home games, including Tuesday's victory over the Celtics, who entered the game with the best record in the NBA.

Adebayo also a game-high 15 rebounds as Miami won without its leading scorer, Jimmy Butler, who sat due to back stiffness.

The Heat also won despite Tyler Herro's shooting woes. Herro scored just nine points on 4-for-19 shooting, including 1-for-7 on 3-pointers. However, Herro stole a Tatum pass with one second left to help seal the victory.

However, center Robert Williams III, Boston's leading rebounder and shot-blocker, returned from a hyperextended left knee. He had 11 points, eight rebounds and two blocks on Tuesday.

Miami, powered by Max Strus' 13 points on 3-for-3 shooting from beyond the arc, led 32-30 after the first quarter. Strus was scoreless the rest of the way.

Tatum also had 13 points in the opening 12 minutes. There were seven lead changes and five tie scores in that first quarter.

Adebayo scored 12 points in the third quarter, but Miami was able to shave just one point off its deficit, entering the fourth trailing 82-75.

In the fourth, Miami used a 15-0 run to take a 92-87 lead. Haywood Highsmith and Adebayo each scored six points during that run.

With 2:19 left, Tatum drove the lane for a three-point play, ending Miami's run and closing Boston's deficit to 92-90. With 42.6 seconds to play Grant Williams hit a 3-pointer to draw Boston even with Miami. Adebayo hit the winner on the next possession.

CAPE CANAVERAL, Florida: In a tweet this weekend, Elon Musk said that SpaceX may attempt a Starship rocket system launch ...

LONDON, England: The Society of Motor Manufacturers and Traders has reported that new car registrations in the UK rose for ...

TAIPEI, Taiwan: After the end of COVID-19 disruptions in China, Taiwan's Foxconn, the world's largest contract electronics maker and major ...

NEW YORK CITY, New York: The Wall Street Journal reported this week that the US Federal Trade Commission is preparing ...

Rescue teams in Turkey and Syria continue the search for survivors of the catastrophic earthquake that hit the region on ...

US weighs ending protection of bears at Yellowstone, Glacier Park

WASHINGTON D.C.: The Biden administration has indicated that it could end federal protection for grizzly bears in the northern Rocky ...

Philippines hands over four more military bases to US

While friends and foes rush to Syria's aid, U.S. refuses to help

WASHINGTON, DC - The global community has extended aid to Turkey and Syria following the devastating earthquakes that hit the ...

WASHINGTON D.C.: US lawmakers have called on the Department of Energy to release documents detailing attempts by Russian hackers to ...